The Board of Directors of the National Disease Research Interchange (NDRI) was thrilled to honor
Francis Collins, MD, PhD, Director, National Institutes of Health (NIH) and other extraordinary individuals and organizations whose achievements and contributions truly exemplify service to science on Thursday,
February 1, 2018 at the Union League of Philadelphia.

View the recap video from the evening:

View the below slideshow of photos from the evening: 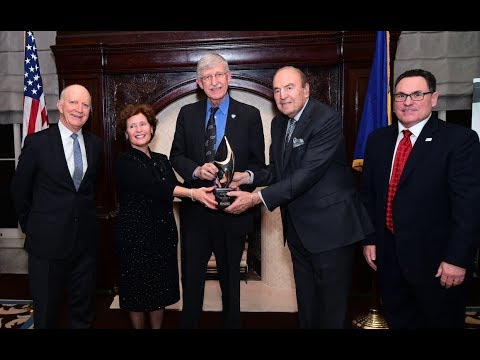 Dr. Francis Collins, a physician-geneticist, is noted for landmark discoveries of disease causing mutations for cystic fibrosis, and his leadership role in the 2003 completion of a finished sequence of the human DNA instruction book. In his role as Director of the NIH, Dr. Collins oversees the work of the largest supporter of biomedical research in the world, spanning the spectrum from basic to clinical research.

Presented by: Arthur Rubenstein, MBBCh, Board of Directors, NDRI and Bill Leinweber

Accepted by: Sara B. Arvay, MBA, Director of Operations

Presented by: Jessica Mulholland, Board of Directors, NDRI and Bill Leinweber

Presented by: Howard Nathan, Board of Directors, NDRI and Bill Leinweber

Drexel University and the College of Medicine

Founded in 1980, the mission of NDRI is to provide human biospecimens to advance biomedical/bioscience research and development worldwide. The progress of scientific research has been revolutionized over the years with the provision and distribution of human biomaterials. The strategic driving force of NDRI has been and continues to be service to science.

Learn about NDRI's executive leadership and Board of Directors: http://ndriresource.org/about-us/leadership